Let’s go back to the south shore of  Massachusetts 1996, where hardcore and metal fans like myself witnessed the birth of a new breed of metal through bands like

They put out a demo recorded in Hanover Mass at Ultrasound Productions. The Color Blood a killer 5 song E.P. with tracks like Blind Loyalty, and of course the title track The Color Blood. The sound was something that no one had sounded like before, and really no one could pull off again. It was a brutally heavy, yet melodic form of metal with a hardcore feel. Hence the birth of metal core, none of that “ Senses fail is Metal-core B.S. I’m talking the real deal metal hybrid. When you listen to  metal bands from the Massachusetts area without a doubt, Sevenday Curse was the catalyst that created a  scene. Were they the only one’s you may ask? Around that time there were other bands coming out with a different sound,Barrit, Fault, Ookla the mok, however Sevenday Curse really forged a different sound. The heavy vocals, the double bass the melodic bridges, the solos and the heavy badass breakdowns.

These guys set the bar, and planted the seed, from that point on, almost every band from the New England Region were using the Metal template that Sevenday Curse created. 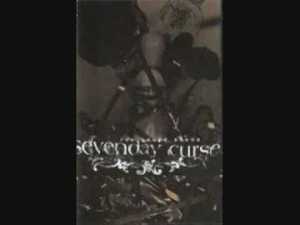 What made a band from Massachusetts create a style merging two music elements to form a brutally heavy combination? One could argue that the north-east throughout history have been known to do things differently, live by their own set of rules, and revolutionize. We have had a “don’t tell us how to be” attitude. The style of music that has come from the New England area, the brutality of the metal, the catchiness of the metal and hardcore; it’s known worldwide. Bands like Killswitch Engage, Unearth, The Red Chord,  Shadows Fall, Converge, Revocation to name a few. Having grown up in the New England area , the metal scene has had its changes, but has never diminished in its merciless brutality of sound.

Sevenday Curse put out the album “After The Storm” on Tortuga Records. Nine songs with a tenth hidden track titled “ The Color Blood” that absolutely crushed when it came out. “ Lament of the Fallen” is a great track to use as an example, take that song and then compare so many Metal bands to this song you will now see the roots of New England Metal.

Now you can call me old-fashioned, but as I got older I gave up on the sub-genre and stick to “ metal” when I talk about something that’s high energy, distorted guitars, if it’s not hardcore, or punk its metal. After the Storm came out and changed the way we expected out of metal. The big metal bands like Cannibal Corpse, Obituary, Sepultura, they have their place in metal. Sevenday Curse put out After The Storm and created a more diverse, melodic, yet absolutely brutal form of metal. The album starts with an intro, sound clips/ samples and intros were a staple of this form of music. I can take you to several epic albums that had these elements. The way this album starts out is like crowded room, radio fuzz growing louder until all sound stops and you hear John Doe ( Kevin Spacey’s character from Seven) say “ I’m Setting the example”   setting you right up for a fast paced   “Dirge for the living”.

The songs build up the energy and then you see the melodic elements of Sevenday curse with songs like “ Of Every Season” the sound of waves, and acoustic guitars. “ November” with a tranquil ambiance of acoustic guitars, to set up the final track “ Revelations” (one of my favorites). I have actually bought this album twice, because my original CD ended up getting a spot that would skip in the middle of Revelations that was not acceptable.   Sevenday Curse had a sound and style, a truly heavy and melodic modus operandi that made waves. They played shows, crushed the eardrums of many.

Then they were gone……. Just like that they disbanded before they had a chance to conquer the world, Sevenday curse quietly stepped out of the spotlight. 2000 was the year we lost the mind-blowing boundary breaking band known as Sevenday Curse. They played a one time show in 2002 for a benefit, but stepped back quietly in to the shadows.

That is until the year of our lord Two thousand fourteen when Sevenday Curse rose up from the ruins and got back into what they had started to do, make killer metal and have some fun.

They got back together, they made a Facebook page Sevenday Curse    and in February of 2014 they even started working on new material. They have all gone through the changes life provides all of us. Growing up, focusing on family and careers, but a fire had still been burning inside. A fire that was never extinguished, just burning awaiting the day to burn bright once again. Saturday May 17th the metal gods from the heavens above graced us with Sevenday Curse playing live for their first time in over a decade. Playing material from the days of After the Storm, and picking back up where they left off. Playing killer brutal metal, with surgically precise delivery. Imagining a band room where the instruments have been put down, and collected dust, the members walk in, brush the dust off. turn on their amps/ cabs. look at each other, nod and start right into ” Dirge for the living”.    Flash forward to October of 2014 and the band goes in the direction many bands are going to. Crowd funding to get their material released trying to balance their everyday lives, work, families. They want to put out music, so they created a campaign to get an E.P. recorded. Support local metal please click here

They are a band that is going back to their roots. A whole lot has changed since they were on the scene. Back in 1999 the Iphone wasn’t an option, no one had iTunes. Digital music was not as large as it is today in the sense that there were mp3’s. I had an mp3 player, it was a Diamond Rio and could only hold about 8 tracks. That was mind-blowing as I was one of the few people in my age group that had one. Sevenday Curse had only a few options that were easily available. Cassette, CD, those were the options, with cassette phasing out. There were not as many music festivals for metal or hardcore as there is today. There was no Facebook, no Myspace, no Youtube either. You could not create an event for all of your online friends to be invited to. It was photo copy a bunch of flyers, hang them up at the Bull moose records, Newbury comics, tower records, clubs, basically anywhere you thought a metal head would walk by and see that you had a show. To come back into a scene where so much has changed, and try to get back into things. It has it’s challenges, but the fans have shown their support. There have already been youtube videos of shows that they played, the most recent from this past week. Then just the other day  ( July 25th 2015) they put After The Storm up on Bandcamp.com/SevendayCurse

With all of the change on the metal scene, also came changes in their own lives. They got older started families, married, doing the 9-5 with their full-time jobs, military commitments. As many know being in a band is not easy, its hard work. Being in a band is very much like having a minimum wage job, and being married to it at the same time. They are booking as many shows as they can, and what i have seen they have booked some great shows so far. It’s now 2015 and they are playing shows getting back into it more and more. The most recent show they played was with Jungle Rot, and On Your Deathbed in Rhode Island. A great show for sure considering Jungle Rot just put out a new album Order Shall prevail, and On Your Deathbed have been playing some killer shows also with some big names in metal. It was a great line up of bands for a summer show. They are booking more shows, and while they are not playing a show every night. They are trying to book shows that will have a great line up and a great crowd. They will even be playing a show to kick off  Revocation‘s fall tour on September 3rd in RI. That is a show I will not be missing.

For the people who aren’t familiar with the band, I bought their album while I was in high school, I bought the album again because I had played it so much and had it for so many years it became old and worn I needed a new CD. Now to think for all of you who can’t find the album in physical copy you can buy it on bandcamp, iTunes, Amazon mp3, Spotify  There are so many ways you can get in on Sevenday Curses great music, by just a click of a button.

Sevenday Curse on Go Fund Me

I have recently gotten a chance to hang out and interview the guys from the band so stick around when I post that up, they have some great stuff they are working on.