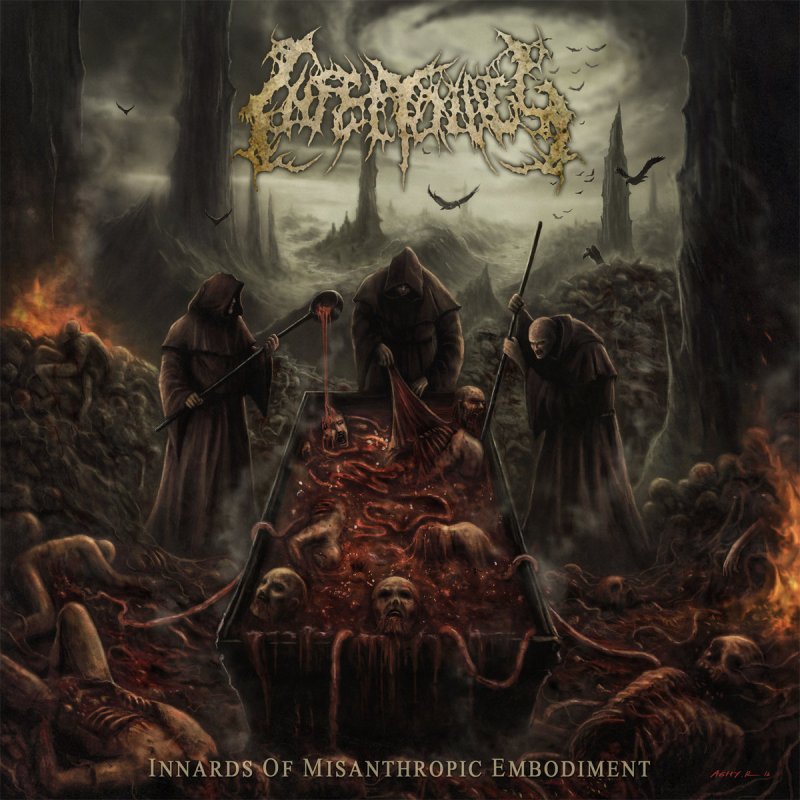 As quickly as the song begins the blasts crash over you and sweep you off your feet. The whole time that perpetuating guitar riff has the listener head banging.  Vocals come in only seconds after the song begins and those low guttural vocals are killing it for me right now.  Also want to point out the sound of the snare drum, it has that ping to it.  While it may not fit all bands style and sound.  It just works for a brutal death metal band, and sounds great coming from Ivan’s kit. The change that happens around the :50 second mark is a classic tell-tale sign that something is going to get heavier, faster, or brutal.  They go back into the same rhythm but it’s been taken to the next level. 1:37 they slow things down for a moment and then hit us with a period of gravity blasts around the 2:17 mark.  A simple gravity blast  filled section lasting only maybe eight seconds but giving you enough time to cause bodily harm to those around you.

There is about a split second between the end of the last track and then they explode with sound before one second has passed. Before ten seconds have passed I find myself head banging and getting into this song.  They have a great sound going on, its dirty, its brutal, and they keep things simple.  This is what a death metal track is supposed to sound like. I like the driving rhythm the guitar riff is forcing.  The guitar is maintaining that driving force behind the song. Listen to the guitars at the 1:17 mark and you will see what I mean. It’s not a sweeping, it’s not tapping, this is an old school death metal riff that really makes the song.  For me it’s not the vocals or the drums, but I really am enjoying the guitars.

They give you a hell of a welcome with a brief intro with a short riff and then into the verse.  It has a grimy brutal death metal feel to it. It’s good but right at the :50 second mark is when they begin to kick things into high gear with a mean riff coming at the 1:04 mark. I love that driving guitar riff, and they leave you wanting more of that because as quickly as you get acclimated to it, they change out and into the next verse.  This song has very little filler, and just plugs right along like a well-oiled machine. Right at the 2:45 mark we get that great guitar riff we heard earlier.

Damn those drums and the guitars right at the beginning of this track really set the tone. I am digging this track and they throw down a short solo to go into the next section. Right around the :50 second mark they revisit the beginning rhythm again. But only for shorter period of time as they get to a slower but heavier rhythm. It has a grimy, brutal death feel to it, and they rock the shit out of that and right at the 2:54 mark they go right back to the rapid blasts at a higher back to high speed.  This song does not disappoint, I love the section right around the 3:34 mark with the guitar squeals. Great track

Zero buildup, and one hundred percent ambush style song beginnings seem to be infectology’s modus operandi on this album.   Because you are hit with rapid blasting, grinding guitar riffs, and guttural vocals all within the first five seconds of the song. They are relentless with the brutality they wield.  The song has a solid tempo, and drive. This song can get you going pretty easily, and the song maintains that drive all the way up to the last few seconds of play. At three minutes and fourteen seconds they pack a lot into this track.

This song has the classic death metal feel right from the first seconds of the song.  It has a rock solid rhythm and I dig the guitar squeals. Out of all the songs on this album, this song reminds me of late nineties death metal. Bands like deeds of flesh, or even before that dying fetus.   After the first verse, the pick up the tempo, increase the intensity, and assault us with a hail of blast beats, gritty guitars, and those damned guitar squeals.  This song really embraces the brutal death metal vibe, and they cut right to the bone with this track. There is no fluff, there are no tangents or little intricate guitar solos.  This song is laser focused brutal death metal, played straight up the way it was meant to be played.

This is my favorite song off the album, I just love it.  The beginning is cool and all but I like the change they go through around thirty seconds in to the song.  That bridge going between verses.  The rhythm from the very beginning ends up being amplified to a more brutal and punishing rhythm. Head banging will be happening, but even more so only 20 seconds later where the same rhythm is being played, but has more strength behind the music. I can listen to this track over and over again. It is a heavy hitting, and takes no prisoners and shows no mercy. This song rips and it seals the deal for me.  This is my personal favorite track off this album.

When all is said and done, this band set out on a mission to make an album, with unwavering brutality, heavy riffs, blasting drums, and soulless vocals.  Causing the listener to get that “fuck yeah” attitude, and to move to the beat. Mission accomplished, I like that they didn’t try reinventing the wheel. They had a goal, and went to achieve that goal, with nothing and no one getting in their way, and leaving nothing left in their wake. This album  is  a solid 7/10  \m/ and find myself spinning Inducing Excruciating Pain many times as it is my favorite track on the album. while the album is straight up brutal death metal, i feel that some of the songs would begin to sound repetitive and for that it did lose me at some points. At any rate, all songs are a solid effort, merciless, and I simply find that out of all the songs, the song I have played the most is track 8.  I will be looking forward to hearing more from Infectology in the future, and will be rocking this album for the unforeseeable future.