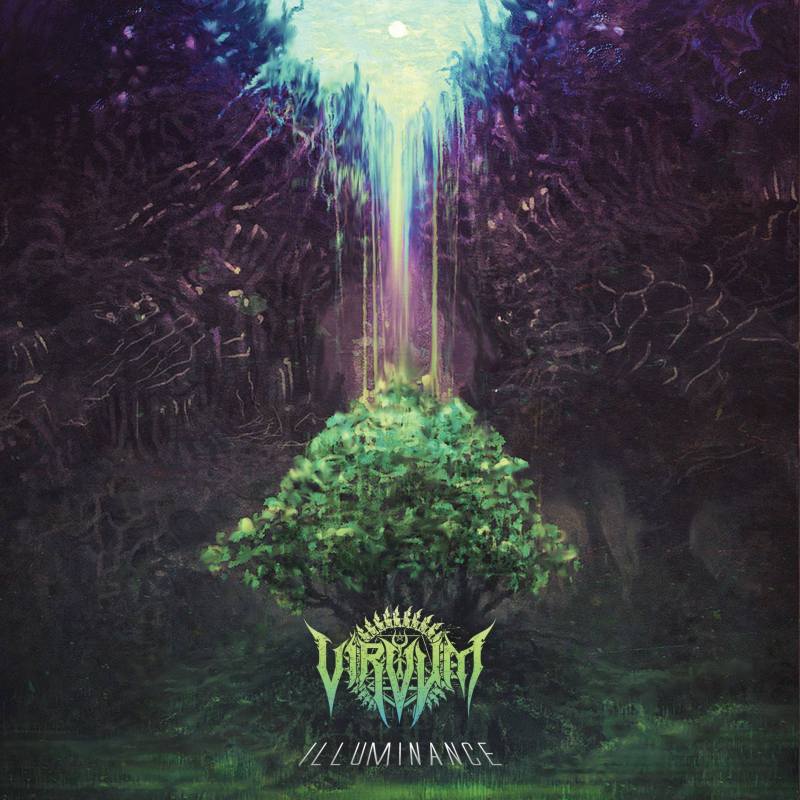 This for me is the first time hearing Virvum, and this is one hell of a way to make a first impression on someone.  There is a very brief electronic sound and then the drums and guitars come in with rapid blast beats and the guitars are matching the precision of the drums speed, and then just as you think you are impressed by that. They hit us with an early guitar solo right around the :17 second mark.  A very enjoyable solo I’d like to mention, as it lasts just past forty five seconds, and then we get a bass solo.  That bass sounds fucking great, listen to how quickly the bass is played. Listen to the finesse by Arran, he really adds something to this album. Following that is a really cool driving guitar riff with a matched rhythm from the drums. Only to come back out with a cool solo again. I’d say this is an instrumental track and a killer introduction to the album with the talent really shining, but alas you get some dialogue with only seconds left in the song.

They don’t waste any time getting down to business on this track but they hit you with this rapid blast and guitar filled section. This feels like that pack every possible void with sound and only for ten seconds before they drop out and the electronic almost cosmic sounds begin to take over the speakers.  For roughly thirteen seconds before getting back to where they left off with blasts, and this time when the vocals join in they are a much lower range set of vocals.  Just listening to theses drums you have to admire the fast attack, and the quality sound behind them.  Diego must be having a blast when he is playing a song like this one. It sounds awesome, and sounds like it would be a fun one to play.

This song begins with a very melodic guitar melody being played for just over thirty seconds and then the drums and guitar distortion sets in.  I love the way this progressed from the first second to the last. This is a solid song. Right around the 1:30 mark they kick things into beast mode.  With the rapid blasting and then listening to the infectious guitar riff.  Those guitars have you hooked instantly. Really digging the guitar solo at the 2:13 mark also. The solo section last about a minute, but doesn’t seem to take up to much time. It doesn’t feel like it’s a long period of timing. I also want to point out the 3:29 mark when they wind things down for a bit. Only to be bringing them back up progressively with a talented drummer and then listening to the guitar tapping. It’s a mesmerizing pattern.  Only to have an impressive guitar riff hit us at the 4:12 mark just after I was impressed by the finger tapping.  At eight minutes and fifty nine seconds, this song has plenty to offer, and really knows how to keep the listener engaged.

Yes.Yes.so much yes from this beginning. I could loop the first sixty seconds of this song over and over. If this doesn’t get you amped up I don’t know what will. The emotions and feelings created from the volumes of energy this song pumps into me via my headphones is truly impressive.  Everything about the beginning, from the guitars, to the bass, and then of course my favorite the drums. Listen to those drums. On point, surgically precise, but listen to the power behind them, listen to the blasts at the :16 mark. There is no pussy footing around this one, hits hard, and fast, and what more do you want from a song like this. Fast, heavy, drums that are going to decimate you, steamroll right over you, with a flurry of blast beats leave you in awe. Yup that’s what you get on this album, and this song is a great example of that.

This song kicks down the doors without warning.  The blistering blast beats with those guitars, and then as the vocals come in at the :07 second mark. They come in with a low blow and the vocals themselves give the song a groove you can follow. It’s not just about the guitars or the drums. The lyrics hit you blow by blow, from :07 to :14 they land effortlessly in a way that you get pulled in right away.  Now listen to that riff at the :14 second mark, these guys just don’t let up. This song will get anyone amped up by listening to the first thirty seconds of it, and you won’t be able to stop listening. I’m actually smiling listening to this track right now. The song grabs you, and there is no stopping the ride you are going on.  There is no way you stop this song to do anything, just listen and enjoy.

I love the way the song begins, you get an early taste of the bass, and the main rhythm they start out with sounds almost empty, but they build off of that. The very next change is something that sounds fuller, like there is much more going on.  They eventually get back to that same rhythm right around the 1:20 mark.  This song much like its title goes through elemental shifts.  The song has periods of raw,  empty sounding sections, that get complimented by the periods of the song that have more sound, a more fulfilling sequence of guitar tone and drums  filling in all other voids. its slightly shorter in length than other tracks, but it holds its own when it comes to complexity and  groove.

This song is really an instrumental track, but really fits the role it has been given.  It sounds like something out of a Hollywood movie where the score was written by Hans Zimmer and his best friend who is a metal head.It sets up the eighth and final track of the album.  It’s that classic, “lets cool things down for a short period of time and then blow the shit out of everything right after”  it’s the calm before the storm, the warning shot, and when you make it through the one minute and forty two second long song.  You will be wise to have prepared yourself for the last song of the album

At just shy of ten minutes and thirty seconds long, this is my favorite song on the album. It fucking explodes right out of the gate and has soooo much going on musically. I just can’t give you the full review of this track, as you are just going to have to take a listen yourself and make the determination. But I will say this song rises above all the previous tracks. And since all the other songs on this album are great, this last track really makes a statement and sets the bar.

This album is a brilliant creation, offering up so much for the listener.  This album displays the range for all the members. It’s not just the vocal range which I must say I am impressed by. But the range the guitars demonstrate, and the drums also.   Some of the songs progress beautifully while they still don’t hold back when it comes to hitting us with rapid fire blast beats and killer guitar riffs to pummel the listener.  No they do not hold back one bit, but show us the other side.  The mellow and mysterious side of things.  I’d be lying if I said I didn’t have a few songs on repeat.  A final warming, and ad rigorem have been looped easily over one hundred times each.  This album is full of great songs, but those two really did stick out for me.  And definitely got played the most when it comes to how many times I played each song while listening to an album.  But ultimately this album kicks a whole lot of ass.  This album is awesome and captivating from start to finish, and is nothing short of a 9/10 \m/.

Go on and pre-order the album,  get in on those pre order bundles and all you need to do is click here to go to their BANDCAMP page \m/