As some of you have seen I was able to interview Chris and Flo from Cryptopsy, now for my third interview I was able to ask Oli a few questions. and to talk about their current indiegogo campaign ( http://igg.me/at/Cryptopsy/x/10796470  ) 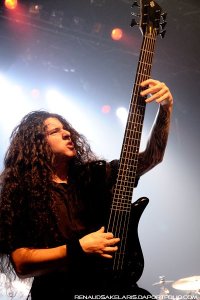 When I saw these guys in Syracuse, I got a chance to really talk to all of them, and also get some impressions from all of them. To watch these guys on stage is just a great show. For all the people in the crowd just thrashing and head banging, a pit only broke out a few times, but for the most part there was a group of people myself included just really taking in the whole experience. These guys give it their all, and part of that is because they are an independent band. They do not have a label backing them up and supporting them. They have the fans as their support. When they get the support they need,  they want to give back, and that’s what helps with their energy  to put on a great show. Oli was in the zone, what I mean is that he was like a different person on stage. After their show when I talked to him, he was just the most down to earth guy. I asked him what one of the first things he would do when he got back home after the tour ended, showered unpacked etc. and he said go to his favorite pub with good friends. After they got back home I ended up reaching out to all of the guys from Cryptopsy, and this is how it went with Oli.

Badger- Did you have fun while you were on the Back to the U.S. tour? Also you had a birthday so what was that like while being on the road touring and promoting the new E.P. and crowd funding campaign.?

Olivier-Lot of fun , old and new friends! The crowd were amazing, I think on that tour we got a bunch of new fans ….And for the birthday , it was an awesome night ,We played Amytiville that night and the guys from Suffocation, Internal Bleeding and Dehumanized show up, good times!!

Badger-I have been both a Cryptopsy fan, and a Neuraxis fan for some time. The technical metal coming from Canada has been just brutal (which is why I like it so much) For you how did it feel going from one killer metal band like Neuraxis, to then playing the bass for the legendary Cryptopsy? And how did you get involved with Cryptopsy?

Olivier- Neuraxis recorded the album ”ASYLON” during the summer of 2010 at Garage Studio with Chris Donaldson . I love to think that he liked working with me , otherwise I don’t think that he would have called me for Cryptopsy haha!

But yeah , the trasition was huge , It was a big challenge for me to play with those guys. I spent a lot of days at Jon Levasseur place’s to learn the old stuff and write the bass line for the Self-Titled as well ….So I didn’t have time to waste!!

Badger- Have you always been a fan of metal? Who are your influences for metal, as well as playing the bass?

Now , I’m still interested in the underground scene , bands like Ulcerate , Dead Congregation , Gigan are constantly in my CD player!

Badger- After the E.P. is released will we be seeing any play through videos from you in the near future?

Olivier-Maybe , maybe not haha. I’m actually not a big fan of play through video . I understand why people like that …but for me, magic happen on stage in front of people , not behind a camera in my basement.

Badger- If you could describe The Book Of Suffering E.P. in five words. What would those five words be? Again I want to thank you for your time to answer my questions, I wish you guys the best, I hope you guys make it to your goal, and wish you safe travels for your next trip of touring to promote the new music.

Thanks , see ya on the road!

So there you go, words from the bassist extraordinaire himself, Olivier Pinard, The guy is just killer on the bass, and a really cool cat. I personally cannot wait until the E.P. comes out, I have been a Cryptopsy fan for a long time. When other bands were playing typical “death metal ” styles, Cryptopsy was playing a much more technical style of metal.

Check out some videos of Oli

Bass and Guitars for this one, hey Oli and Chris tearing it up!!!

The pricing is pretty fair, you have to figure the cost of things these days, everything is going up. And these guys are trying to keep the prices competitive as well. The cost of Gasoline, and all other goods out there, everything is expensive these days. However the way I look at it.  I am a sucker for a physical CD. for $20.00 I will get my E.P. shipped to me with a digital download, and while some may argue its too expensive. I believe in spending a little more to get a better quality. These guys offer a better quality, and raise the bar every time. Even if you don’t have 20 dollars for the CD. Do some research, a lot of bands are doing digital E.P.’s for $5.00   So Cryptopsy is on point with that, I have never been disappointed by these guys, and i will always be a fan. So whether all you have is $5.00, or not even that, they have a perk for $1.00 contributions. That way you can at least be a part of something cool, and help out one of the pioneering bands of technical death metal.