Disposal Of The Dead / Dharmata 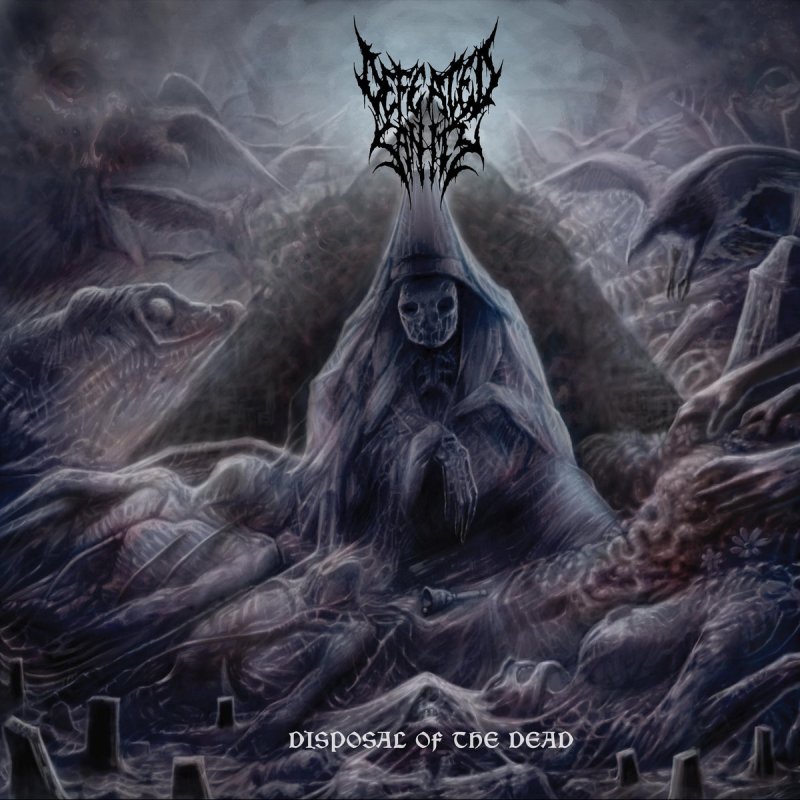 Today the Devils has brought us a truly unique and mind blowing release in the form of self split CD. Yea a split CD with Defeated Sanity, and themselves. This album is fucking mind blowing, it’s a split cd, with half being the brutal death metal that Defeated Sanity is known for and then some really cool jazz infused progressive death metal on the latter half of the CD and titled Dharmata.  This album is brilliant, the way that this album opens up. The tribal ritual like intro on Remotio Mortuorum. It’s a subtle way of allowing the listener to acclimate oneself to the music that is about to be projected from speakers or headphones. Into the Soil comes in hard and fucking fast, with the blast beats being surgically precise and just the slightest ping on the snare.  I’m loving just how brutal this album is for the first half of it, consuming the grief is a great track. In particular the way it starts out, fast and those gravity blasts sound great. I think that this album is truly one of the best albums of 2016 mostly due to the sheer talent that these guys are delivering in this one album. But it’s essentially a split with themselves. And the latter half of the album with the jazzed up progressive death metal is truly top notch.  And I think it’s an important part of the music process also, for the people that “don’t understand” metal. Especially brutal death metal , I think its assumed that sure  metal bands can growl and play drums fast but  there’s no real talent there… right? WRONG  and this is what I love about this album, these guys tear shit up  following their modus operandi, but then half way through the album they decide to go south paw on us and deliver a different form of brutality. And these guys are really fucking good, this album is a must have for anyone a fan of death metal, let alone brutal death metal, and also progressive metal and the sub genres associated with it. One listen to even just the track Dharmata is enough to have sunk its claws in me and I wasn’t going to pass on this album. This album has everything from a hard hitting yet rapid hail of blast beats, and jazzy bass and guitar riffs with a more progressive drum feel to the songs, and the vocal are also different. I mean they didn’t just change the sound of the guitars or drums, they changed everything the vocals everything. And that adds a little more to what makes this album great. Because it’s like they wanted to do something with a clean slate but still get a chance to put it out with some recognition by their already established fan base, and then could also cross contaminate their fan base and generate a larger group of fans that will be following their musical creations. 9/10 \m/

Like what you are hearing? then pick up your copy by heading over to their BANDCAMP page and ordering this killer album.

Metal Festivals happen every year all over the world, these festivals are one of the greatest shows metal heads end up going to. Getting a chance to see metal bands from all over at the same venue, be it an open air stadium, or other concert halls. Many metal heads like myself have great memories from going to big festivals, hearing and seeing bands we are stoked to see, to discovering bands that we had never heard before. In the Northeast U.S. there is really only one big festival that has been happening annually since 1999. But that is just not enough to satisfy the appetite of metal heads across the region. This is when a drummer and tattoo artist from the Massachusetts area decided he had waited long enough, and was going to take matters into his own hands. Jamie Cross came up with Hothfest last year and is doing it again this year around. Hothfest -2016 we will be witnessing 30 bands over the course of two days. To make things even better its on a weekend, Saturday and Sunday, that means for most you wont have to miss work to go to an awesome metal show.

I had the chance to talk to Jamie and ask him a few questions about Hothfest 2016 to get an idea,  what started it all, and what to expect.

Badger- So this is the second annual Hothfest, have you already noticed more exposure of this festival than when you did it last year?

Jamie- A little bit, I mean I’m trying a bit harder, I went to other shows and have been passing out postcards to everybody. Of course there’s Facebook and doing the old school thing driving around and putting up flyers but I’m just hoping for the best. It should be good

Badger- Yea I think so, and what prompted you to organize a metal festival in the first place?

Jamie- When I did it last year I kind of did it just for fun and it turned out pretty good, and then I had bands from across the states offering to play so, I mean I probably had one hundred bands offer to play this year so I had to pick and choose but yea it’s awesome.

Badger- That’s cool, that very promising now I am looking forward to 2017 already hearing that.

Jamie- I know right me too, I can’t wait

Badger- So what has the general reaction been from the bands last year? Were you like reaching out to bands last year, and this year they are coming to you to do it?

Jamie- Yea I reached out to a couple that played last year and they did well, and a lot were friends of bands so I had people say “ you gotta check out this band,” so I got a lot of that and bands started hitting me up offering to play, offering to get on it.

Badger- Now here is a metal festival with  a lot of bands playing,  do you have any sponsors for this? Or is it all you?

Jamie- No I do it all myself man,

Jamie- Yea I just put like the music stores and logo on our artwork because they were letting me hang stuff up there to help out.

Badger- Now do you have any times for what time the doors open and what time it’s going to run till on Saturday, and then the same for Sunday?

Jamie- Yea I am not positive on that last year doors opened at noon, and bands started at 1. So I’m assuming the same, I haven’t figured out the times yet, I have a few other shows going on right now also that I am working on.

Badger- What other shows do you have going on?

Badger- Any shows besides that one?

Jamie-Then after that, the next one is actually after Hothfest and its January 23rd and called musical masterpiece theater the art of the guitar edition. It’s going to be a metal show for the sickest guitar players. I have Mark Rizzo from Soulfly headlining, and then I have Dave Sharp and the Solar Power, a few other ones are going to be on that, and I am still waiting to hear back from them.

Badger-So I know, I can’t remember where the venue was originally going to be, but was it a case of so many bands and people showing interest that caused the venue change?

Jamie- No actually something had happened and they switched owners so I am actually having shows there now. I had already moved it so we are going to keep it where it is (Maximum Capacity) I know the guy that owns it now so and they own both venues so I will be throwing shows at both venues. Yea I have a big summer show I throw that has about 30 bands called rocking on the river and it’s my birthday bash, and we have that at the waterfront. So I already booked that again this year.

Jamie-That one’s kind of like Hothfest but the summer instead. I do about four or five big shows a year, when bands play every weekend people sometimes don’t want to show up. So (with a big show they are more likely to show up)

Badger- yea I know my old band we would play the same club almost every weekend because we were tight with the owner. But we knew that some people didnt want to come and see us every Friday or Saturday, it is what it is, and you always have the group that wouldn’t miss a show for the world.

Jamie- We have our first show in NH playing at the Shaskeen pub in Manchester. It’s January 2nd and I am pretty psyched because we haven’t played anywhere else except from around here so it should be fun.

Jamie- We sound like COC and Pantera that who we get compared to all the time, two of my favorite bands so I will take that. We are half rock half metal so.

Badger-Are there any updates you want the readers and local to know about this show? Your band? What you are putting into this, other stuff about you? I know you do tattoos so…?

Jamie-Yea I own a tattoo studio, I do some work for bands cd artwork, t-shirt all that stuff. At the shows the background for Hothfest that’s one of my paintings I did I actually just got the posters in for Hothfest, so I will be driving around and hanging wherever places will let me.

Bader- I know you had just done a painting event,

Jamie-Yea called who wants to paint with me. We had a blast, it was a lot of fun.

Badger-Is that something you think you will be doing more of?

Jamie-Yea every couple of months I am going to do it, this time around I am going g to limit it to around 25 people so I know and have them pay up front. We had a blast, listened to metal and local bands all night.

Jamie-If I could add one more thing the band Defeated Sanity will be here all the way from Germany they haven’t been in the states for about 5 years. So that’s going to be a pretty cool deal that they are playing at Hothfest and they are bringing a band called Iniquitous Savagery from Scotland with them so we have this whole European/ UK tour coming this way and also a band from California, and then metal bands from NH, MA, Vermont pretty much everywhere around here.

Jamie-Sunday is more of a local thing, and closer, and the travelling bands are playing on Saturday.

Badger-That’s pretty good planning, especially for like Defeated Sanity who are on tour. Thank you for setting up a sick metal festival, thanks for trying to keep the metal scene going around here, and thank you for the phone call.

So there you have it, I for one am looking forward to Hothfest 2016.

The set lists are TBA, however the lineups for both days are already determined;

Assault on the Living

She Walks Without Legs

If you want to check out the bands before the show, here are a list of their FB pages

Also check out the event page for Hothfest 2016