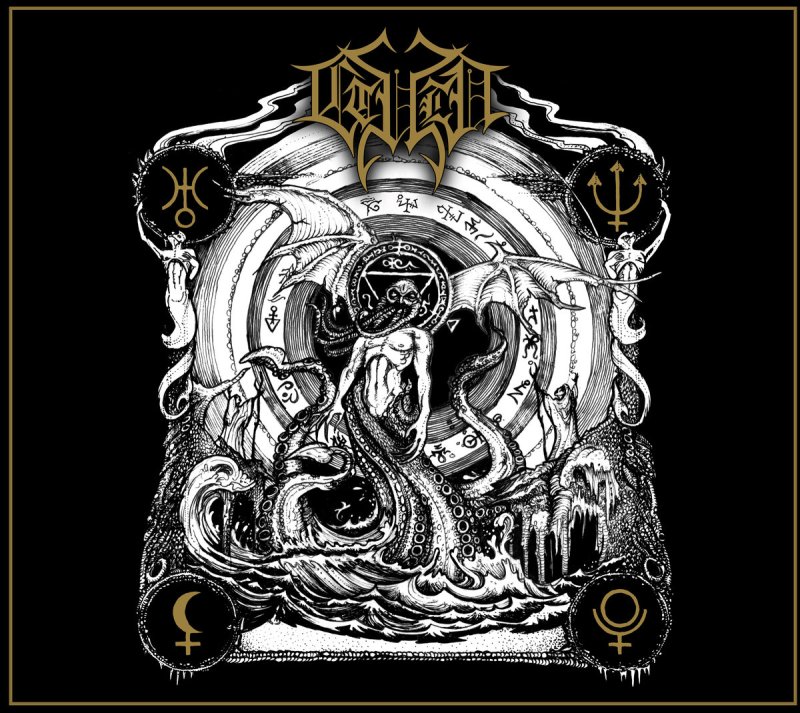 Today the Devil has brought us a a dark and primitive extreme  black metal self titled album by the German metal trio Ctulu. This album is filled to the brim with catchy riffs, drivng rhtyms, dark lyrics, and blistering blast beats. some fucking killer blackened metal! This album surprised the shit out of me. I really dig the album art too, its dark and cult like. its like a page from some H.P. Lovecraft tale.  Track after track they really impressed me, the first song was a bit on the slower and darker paced side of things. But it sets up a lot of imagery within the music. I mean the more I listen to it, the more I wonder why I haven’t heard this group before.  However the second track follows up with faster pace and and fucking bad ass beginning. The guitars and drums really set up this song and it’s a fucking catchy track right from when the vocals begin. The third track begins to compete with the previous track in speed and contagious choruses and vocals in general. The guitars are a a driving force, even with how straightforward the riffs may be. This level of blackened hasn’t been on my radar for a while.  The album has only two dark and slow tracks and those being Serce krwawe and Rozgoryczona, rozczarowana, a gotowa na wszystko.  The rest are all a fast paced, with the guitar really grasping out you while the drums are so precise and blistering fast. This is what I love about finding a band I haven’t heard before. When it has a “WOW” factor and really impresses you. This gem came out just about a month ago and has been getting a lot of play these past few weeks. Our top played tracks are Totenhauswinde which means death house winds. And yea the song is about as badass as its name is. Von Mondeswächtern und Menschverächtern is also a killer track. This album is 100% worth being check out and luckily for you its on bandcamp so check it out below. For some really dark, and driving blackened extreme death metal that will certainly impress many of you. 7/10 \m/

If you like what you hear, you can pick this blackened German gem up over at Ctulu’s BANDCAMP page

Also show them some love on FACEBOOK by giving them the thumbs up so you can stay up to date on news.