Hi guys! I am honored and extremely stoked to bring you my review for the brand new release from my Chilean brothers in Bleak Flesh!

First, let’s look at a bio of the band… 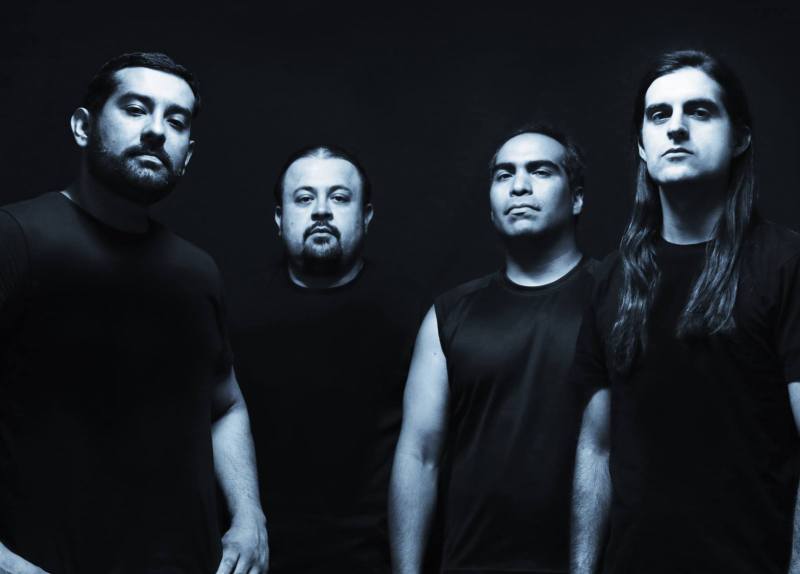 Formed in 2004 in Santiago de Chile by Matias Quiroz under a different name. By 2009 the project had evolved to what is Bleak Flesh. Soon after, bassist Enrique Carvajal joined ranks. By 2012, talented drummer Sebastián Vidal had joined the ranks and they had recorded some demos which would later be released on a compilation in 2015 called “A Glimpse from the Past: The Unreleased Demo Collection”. In 2013 the band was complete with addition of Nicolas Martinez on guitar and Paulo Carcamo on lead vocals. The band would the release their 2013 debut EP, THE GATEWAY, presenting an interesting mix of genres like technical and melodic death metal with progressive touches and nice synth mixed in. In 2014 Bleak Flesh released their first full length album called TRANSCENDENCE. The album got great reviews from fans and critics alike and I even reviewed it a while back! The CD’s even sold out! This EP should be highly anticipated based on the great response Transcendence got, not to mention the brand new vocalist. On January 1st 2016 Radial Velocity came out as the first song recorded with Ngen Kerruff on vocals, being the first single for the new OVERCOMING REALITY EP. On December 19th 2016 they released the second single for the EP, The Spectral Path, along with a sweet music video.

Their music is extremely well rounded within seamlessly molding different subgenres together. Not the same way Cyborg Octopus does, but these guys are still completely unique. They mix Progressive Metal with synths, Technical Death Metal, Djenty and other groovy and sometimes funky riffs, melodic Death Metal and more!

The vocals are powerful and have a great tone. His delivery isn’t quite as enunciated as their previous vocalist Paulo, however he makes up for it by having a really excellent tone and range. He does have enjoyable delivery as well and a wide range. He can go from gutturally low, which he only does on occasion, to a powerful, almost Polish DM sounding mid low and some soaring awesome highs which are also kind of dark and intense. They remind me of the blackened highs heard in Slugdge. Though overall, the bands are very different, they are both slightly experimental and incorporate similar vocal traits at times.
There is still clean vocals on this EP, like their previous work, but it is different and it isn’t coming off forced. That being said, no vocoder. Which I am OK with because I don’t really like vocoder and their previous work war the only use of vocoder I have ever managed to enjoy in any band. In fact the clean vocals in songs like Overcoming reality, where the cleans come in right away, before they even proceed to get brutal, and Sunshine, which has some great epic but totally add to the overall vibe and epic-ness of the songs. Sunshine by far has the most cleans and I think they are really fitting. It also has some great riffs and beats and grooves. The cleans remind me of the cleans that Cyborg Octopus lays out in their Neo-classical influenced song, Divine Right (In D Minor). I personally like them a lot.

The bass work sounds great! The opening and title track, Overcoming Reality has some sweet bass lines, especially during the parts with prominent synth. It sounds like there are some cool slapped bass licks and fills.
Expanding the Existence has an excellent bass solo when it mellows out and then goes in to a beautiful guitar solo section. They mellow it out the first time and he plays a great bass line and then they go to a nice upbeat riff for a bit and mellow it back down to the amazing solo sections.

The guitar is very enjoyable as well. Matiaz is an amazing player who can create beastly riffs and beautiful solos. The riffs are exciting and very upbeat. Expanding the Existence has some super catchy and quite intricate riffs and that absolutely lovely solo mentioned before after with wicked bass sections. Galactic Monolith is a great and varied song. Several awesome grooves and lots of really wicked fast parts too. I particularly love the little melodic lead near the end of the song!

The instrumental track, The Dawn of the Ancient Realms, is simply outstanding!

They soften it down at just before 2:00 and the bass has some totally awesome lines, then they go into a rather freely and super epic solo, into a sick groove with more awesome bass! This then leads into another fantastic solo! Love the tone too! The riffs are extremely exciting and quick with really blistering drums, though he has great feel when they need to let the song breathe too. The synth is pretty prominent through most of this song and it is used well. It fades out with a kind of tribal feel.

The guitar solo in Radial Velocity, which was one of the first singles for the album, released last year, is absolutely amazing. It is fairly lengthy and goes through several different ‘sections’ and is extremely well written. The solo section in the more recent single they released at the beginning of this year is out if this world as well. The Spectral Path has all sorts of incredibly catchy riffs, wicked intense drums and roaring and soaring vocals. But that solo is just absolutely fabulous!

The drums are killer. Great beats and mix. The cymbals sound great as is but when the synth is going, it is mixed really well too. The frequencies add a really nice angelic feel. He sometimes tastefully incorporates gravity blasts as well. Such as in Galactic Monolith, which also has some wicked groove at times and some excellent fast double pick and ride beats that I lust love. And also such as in Spectral Path, which has awesome blistering fast beats that are perfectly placed and not only speed, but excellent feel as they give this song room to breathe several times and every instrument totally plays into making it work, especially the guitar and drums in this song. All sorts of other enjoyable cymbal work as well. not only on that song. The EP is packed with awesome grooves, sweet super fast yet creative beats with lots of great cymbal and especially ride work, and seamless transitions.

It makes me proud to hear this EP. These guys are amazing people and musicians, creating truly unique and inspiring Death Metal. Fans of original and slightly experimental sounds with great melody and groove, this band is for you! The vocals are well ranged and have an exciting delivery and great tone. The drums have incredible speed and excellent beats and fantastic groove and feel when called for. The riffs are creative and very intriguing, with tons of stand out bass through this EP! I strongly urge you to give this a listen! I know this band can have a bright future in this genre if they reach the right amount of fans! It would be a dream come true to see these guys live or play with them some day!

For fans of Atlantis Chronicles, Between The Buried And Me, Dark Matter Secret, Cyborg Octopus, Slugdge, Flub, Black Crown Initiate