Earlier I had posted about the  Matriarch tour, well come to find out Revocation released a video to kick off the tour. the video is for the track ” Labyrinth of  Eyes ” off of their album ” Deathless”. You can check the video out here; https://youtu.be/l1CZZU5r7IQ?list=PLy8LfIp6j3aIzwZMuY2sSaDX0wzdzBuhI 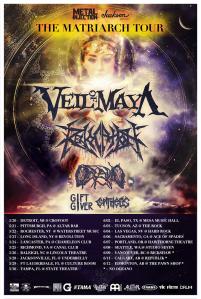 For some of you, you may have already heard, but for others maybe you haven’t. This summer is already booming with some great tours, to add to the list of great bands to see this summer will be Veil Of Maya!   In support for their most recent album “ Matriarch” the band will be going on a 21 Show tour with the support of “ Revocation”, “ Oceano”, “Gift Giver”, and “ Entheos”.   The Matriarch tour presented by Metal Injection starts May 20th in Detroit, MI, and at this time ends on June 14th in Regina, SK. They have posted “ more dates TBA” so that’s great news as the tour could go on a little longer. I have the list of tour dates they have posted on their facebook page, https://www.facebook.com/veilofmaya  also check out their video for “ Mikasa” of the Matriarch album https://youtu.be/lCPwR7R4hlA
Wed/May 20 – Detroit MI @ Crofoot
Thu/May 21 – Pittsburgh PA @ Altar Bar
Fri/May 22 – Rochester NY @ Waterstreet Music Hall
Sat/May 23 – Long Island NY @ Revolution
Sun/May 24 – Lancaster, PA @ Chameleon Club
Mon/May 25 – Richmond VA @ Canal Club
Tue/May 26 – Raleigh, NC @ Lincoln Theatre
Wed/May 27 – Birmingham AL @ Zydeco
Thu/May 28 – Jacksonville FL @ Underbelly
Fri/May 29 – Ft Lauderdale FL @ Culture Room
Sat/May 30 – Tampa FL @ State Theater
Tue/Jun 02 – El Paso TX @ Mesa Music Hall
Wed/Jun 03 – Tucson AZ @ The Rock
Thu/Jun 04 – Las Vegas NV @ Hard Rock
Sat/Jun 06 – Sacramento, CA @ Ace of Spades
Sun/Jun 07 – Portland OR @ Hawthorne Theatre
Mon/Jun 08 – Seattle WA @ Studio Seven
Thu/Jun 11 – Calgary AB @ The Republik
Fri/Jun 12 – Edmonton AB @ The Pawn Shop
Sat/Jun 13 – Regina SK @ The Exchange

Based on what Nile has up on their Facebook page https://www.facebook.com/nilecatacombs?fref=ts

They will be touring in late summer and run throughSeptember. Their tour will be titled  “What Should Not BE Unearthed” Tour  and unfortunatley for North Americans it will be taking place in Europe .  The album will be released this Summer and then they start  touring in Europe on August 29th at Massivefest in Warszawa, Poland and dates continue through Sept 27, 2015 The tour will have  Suffocation and a unknown at this time  undercard. The tour is being booked and promoted by Massive Music.Tour date s are listed below for Europian Fans, or anyone planning on taking a trip to Europe this summer and may be in the areas.  At any rate, if you arent going to see them on their tour then at least its a safe bet to make that you can listen to, or pick up their new album when it gets released.

Check out their tour schedule below;

“What Should Not be Unearthed” TOUR 2015 Europe

Also for some who havent heard Nile or just need a little nudge to give you the motivation you need to check them out here https://youtu.be/NIVkEvWT1GU?list=PLWj1VJYOhco2H9ehA57rDH5xpxOW4ny5C

For fans of ” High on Fire”  they are annoucing a north american tour this summer kicking off in July as well as having their Album drop June 16th  via eOne music.  check out the track ” the black plot”   at http://www.rollingstone.com/music/premieres/hear-high-on-fire-take-on-aliens-with-new-face-melter-the-black-plot-20150512     signature High on Fire sound starts the song off on the right foot,  guitars and a rolling drum beat to get you amped up for Matt Pikes vocals. so far i have listened to the Track at least half a dozen times today. From what i am hearing Luminiferous is going to be a badass album. i cant wait to hear it when it comes out.  for tour dates i have the list here;

Also check out their Facebook page for more details. here’s a link to their page, https://www.facebook.com/highonfire   or

Aaaaand I  am listening to the song again, its that good. ( also want to note that it was recorded in Salem Mass, at Godcity Studios and produced by the talented Kurt Ballou)