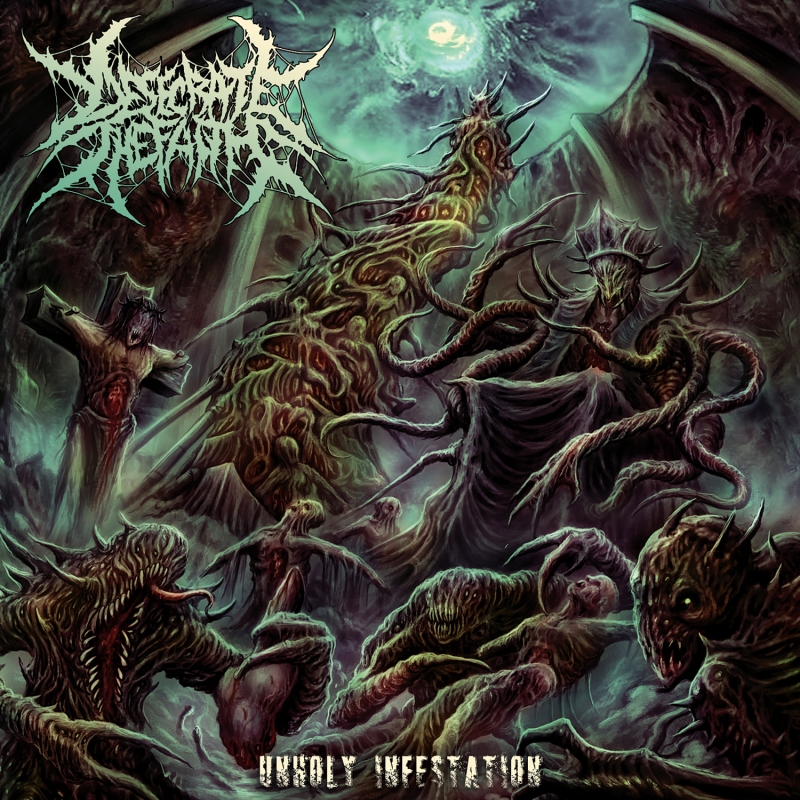 The album begins with the track titled “Daemones Nos Ave Satanas”. This song begins in such a meat grinding brutal fashion.  The sound clip is filthy and the music fades in slowly and heavy as hell. Really giving an ominous vibe to the music that has just begun to project from your speakers. This is more a less an introductory track as the song is really just a slow roll of punishment, and growls. But they follow that up with Predatory Impalement, what a way to kick things off. The setup is quick and simple but the blast beats and the guitars are relentless.  They blend technical riffs with brutal death chugs.  Not to mention the vocals are solid, a low guttural style, but the backing vocals match almost perfectly to fill in some areas here and there.  After listening to Predatory Impalement I was wondering if they would be continuing this album in a step by step progression towards a heavier and more brutal track each time. Malignant Divinity follows that theory, as it is one of my favorite tracks off this album. It’s a very catchy song, the guitars halfway through that track show another side to them. It’s not just going to be brutal riffs and blast beats. They slow things down for a few bars while the guitars play a short and melodic sequence with some pinch / squeals before transitioning back to that driving brutal death. The hits keep coming with tracks like “Shrine Of Enmity” it follows the saying “everything is bigger in Texas” including the brutal hits to the gut that this album delivers.  Just like the album artwork, this is a filthy and brutal album.  With tracks titled Septic Womb, and Unholy Infestation, they aren’t following any political correctness and worrying about who they offend. They set out to create a brutal album, which will sink its hooks deep.  The music is unwavering, blunt and brutal.  I will always gravitate towards the drums, and Mike does an impressive job on this album. His drums are crystal clear and the overall sound of this album is great. This album is one of those that are going to go the distance in 2017. I see myself spinning Unholy Infestation many times over as I have been listening to this one and I love it. What a way to start your morning than to be blasting this at 6:00 A.M. and preparing for my work day like I’m preparing for a cage fight. 7/10 \m/